“This is information. The proper use of it can bring a new dignity to mankind.”

This is a statement from a segment of the 1958 film entitled ‘The Information Machine’ which was completed by Charles and Ray Eames. This statement poses an interesting assessment on the ability of humans to collect and use data in a manner that is thoughtful, ethical and productive. The calculator had an enormous impact on the ability of humanity to analyse large amounts of data so that it could be interpreted on a human scale. However as is stated in the film, it remains the responsibility of the scientist or designer to input the ‘raw’ data for the computer to analyse. There is an issue here in terms of the transference of moral accountability from the person responsible for the input of data to the computer itself. In error management terms, this causes a diffusion of responsibility that results in a complete lack of accountability for the mistakes made on either part. This issue has evolved even further today as the methods by which we collect data are completed in part by the computer which we use to analyse that same data. 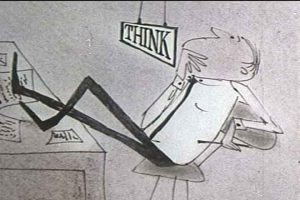 The transfer of this data analysis into practical use or ‘storage’ is another issue examined by the film. It talks about the nature of speculative design, and the nature of individuals to mentally catalog visual interpretations of a system. Charles and Ray Eames managed to encounter many recurring themes existing today and provide useful insight in the perceptions of data analysis.

One thought on “The Information Machine”